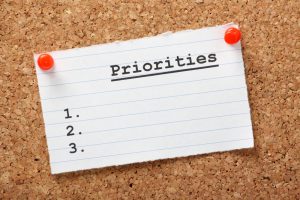 I used to love lists.  I have been a card-carrying list maker since 1980.  I still prefer a good pen-and-paper list on a notepad to a Word doc, wiki, or whiteboard.

List-makers used to be somewhat unique, and kind of freaky types.  Now, everyone makes lists.  People Magazine publishes the Most Beautiful People list.  ESPN publishes the Top Athletes of the Century list.  Less known publishers distribute some really fascinating material, like the 50 Best SEO Blog Posts of 2009 or the Top 10 Most Important Tweets of 2009.

I am taking a stance against lists, if only for about one week.  My only prediction for 2010 is this: marketers will publish lots of lists in 2010.  They will do this (and the “they” includes me) because:

However, I will use this post to comment on the lists that have already been published.  I used this magical tool (and it is a tool, and just a tool) called Twitter to pull down a search of 2010 marketing prediction lists.  Not unlike holiday shopping or holiday greeting cards, the 2010 predictions lists start earlier every year.  If I weren’t taking a break from lists for a week, I’d just go ahead and write my 2011 marketing predictions now to get ahead of everyone else.

So after reading 6 or 7 2010 marketing prediction lists, here are some predictions I agree with and disagree with:

I DISAGREE. I completely understand Robert’s premise, and his brief reasoning makes sense.  I happen to think SEO is more important than ever, given the massive growth of social media and new integration between social media and search.  SEO has simply become a more complex issue, but it remains one of the most important components of a marketing plan.

Rand Fishkin tells us that SEO spending will increase dramatically in 2010.

I AGREE, but with a qualifier.  I think SEO warrants a spending increase, but I am not sure it will be “dramatic” in 2010.  Now, if we were to include in that spend the elements of social media that impact SEO, perhaps we’d be talking “dramatic”.

Seth Godin predicts “A lot of people (who were only wasting time at work, not investing in an asset) will lose interest in Twitter as the next shiny thing comes along.”

I AGREE. Twitter’s value – if used correctly for business purposes – is indisputable.  However, as I stated in an earlier post on social media overcrowding, the major social media properties tend to lose some business value as the “wasting time” portion of the Early Adopters get bored and the Late Majority floods in.  That typically means a certain portion of current Twitter evangelists will disappear and latch on to one of the 200 – 300 social media properties that are set to launch in the next few months.

I DISAGREE. eMarketer was very safe with this one.  How can anyone disprove whether mobile commerce’s time has indeed “arrived”.  That’s like trying to disprove Mel Kiper when he tells us an NFL draft pick has “tons of upside”.   My disagreement is simple: almost every mobile commerce application I’ve seen is clunky.  I want to be proven wrong here, but I just haven’t seen applications that take advantage of the all the unique characteristics of a mobile device.

I AGREE. It’s already happening.  I love David’s explanation, so we’ll just use that:

These elements of cheap, fast and experimental  are going to finally catch the attention of big brands in 2010. Instead of ignoring the little guys, a painful realization to many larger companies when 2009 ripped apart their business, is going to lead to entrepreneurs being a trusted resource and strong case studies.

Steve Parker calls for 2010 to be the year when the practice of allowing sales and marketing to operate as separate, conflicting silos ends once and for all.

I DISAGREE. I want to believe this one.  Steve makes a good case for why this should happen.  I also make that case on a daily basis to clients.  I just don’t see it happening as quickly as it ought to.

Steve Woods says that as data becomes more and more available and less costly, the value of an actual relationship will increase.

I AGREE. We’re all marketers now, regardless of department or function.  We’re all using social media.  We’re all looking at dashboards and customer data.  What separates you from the next guy or gal that has access to all the same tools and data as you do?  A solid, good old-fashioned relationship.

I sincerely appreciate the time each author used to put together their predictions.  If I were as insightful as these guys, I would have put together my own.  Instead, I offer once again my only prediction for 2010: marketers will continue to publish (lots of) lists.  I can put a 100% guarantee on that one.

As Right Source’s co-founder and CEO, Mike Sweeney creates, plans, and implements our vision, mission, culture, and strategic direction as well as serving as an advisor to our clients. Mike received a bachelor’s degree in business administration with a major in marketing from the University of Notre Dame and has more than 20 years of experience in B2B marketing strategy, including digital, content, and marketing technology. You can find Mike on Twitter and LinkedIn, or read his other posts.