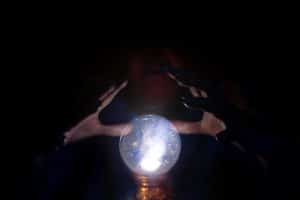 As 2011 approaches, this is the time of year where everyone writes that blog post featuring predictions for what will happen in the coming year.  Because, as you know, of course we can all see into the future.  Rather than throwing out our own wild predictions, we reached out to some of our friends and colleagues on what this coming year may hold.  Here are some thoughts on what 2011 may bring in the world of marketing strategies, marketing tactics, mobile marketing, social media, leadership and management.  Take a look below and add yours in the comments section.

With Facebook steaming to over 500 million users, finding ways to become profitable from ad revenue and now introducing email in their platform, Google will make new attempts to ‘become social.’ While all of their attempts in the past have been met with luke-warm reception, it has not been due to a lack of effort. I suspect we will see even greater efforts on Google’s part to re-position themselves as merely a destination for search to a true destination. In other words, I believe Google may start to work on time-on-site in light of the massive marketshare they have left on the table for Facebook to capitalize on.

Social media site Facebook just became the number 1 website on the Internet. By the end of next year the number of mobile devices are set to exceed desktop computers and TVs. Soon after the Internet on mobile devices should become the predominant advertising channel versus print, radio or TV. And leveraging social networks gives the best reach for a message. But the platforms and technologies of the Internet change very rapidly. Therefore new technology minded agencies who focus on social and mobile communication channels are set to be the next big companies. They are best positioned to address the needs of future marketing over the agencies of lore.

A Robert Half Technology survey from April 2010 indicated that CIOs are increasingly more strict in limiting personal and corporate access to social media sites. I believe this trend will continue in 2011. With the recent WikiLeaks attacks on corporate web sites and increasing concerns about security, corporate social media strategies will see more and more resistance from CIO’s and IT folks about usage in the workplace. And you can take that to the bank! (sorry, bad joke)

Will Consumers Wake Up And Start Protecting Their Identities Online?

Consumers will continue to become even more comfortable sharing ridiculous amounts of personal information online and continue to do absolutely nothing about it. It’s somebody else’s problem if my identity get’s stolen right? Not for long. My prediction is that credit card companies are going to start doing an about–face on eating billions in fraudulent charges. Police reports are going to be filed and those who once skated by for stealing a credit card number or two and not even being researched, let alone prosecuted, are going to do time. It is the only way to change this industry.

Facebook will not be the only game in town come 2011; be ready to take advantage of marketing opportunities on new social networks!

The infamous leak of 100 million Facebook user pages in July of 2010 caused a scare among users and created what may turn out to be a golden opportunity for potential competitors. Facebook also suffers from a host of other privacy concerns: (1) complex security settings that leave users unaware of their personal data being public, (2) hackers have repeatedly defeated Facebook security, (3) a growing number of Facebook applications that provide access to user data, and (4) Facebook’s own connect buttons make user information available to other sites. The net result is that user privacy on Facebook is virtually nonexistent. With security being brought to the forefront of users’ minds, it is an ideal time for a security-conscious social network. One prime candidate, although still in Alpha, is Diaspora. This new social networking site touts the not so subtle security centric slogan, “Share what you want, with whom you want.” Other social networks are in the works for release in early 2011 as well, such as Google Me.

If history proves anything, Facebook’s ‘monopoly’ is temporary. Looking at the last decade alone, there were two cases in which the public feared a company was ‘taking over’ the internet. In early 2000, people panicked that AOL was taking over. Ultimately, AOL faltered, chief among the reasons was a single-minded focus on mining the then lucrative Internet dial-up access business. MySpace is another example: officially launched in 2004 and by 2005, MySpace was the king of the Internet, with a base of nearly 80 million users. News Corp. purchased MySpace in 2005 and immediately tried to monetize it by inserting advertising into nearly every aspect of the user experience. MySpace peaked in 2007, with 150 million users, but due to the barrage of ads, it plummeted to 109 million users by mid-2010. The moral of story is that Internet titans come and go. Why should this matter to businesses? The answer is simple. Keeping an eye on these emerging social networks enables a company to be in on the ground floor, seizing market share, and reaping profits from a growing customer base. The importance of diversification in marketing efforts also holds true for social media marketing. Focusing marketing efforts entirely on Facebook could prove to be a dangerous strategy in 2011.

2011 Will be Big for Video and Consumer Brands on Facebook

The Value of Relationships Will Continue to Increase

Steve Woods said while looking toward 2010, as data becomes more and more available and less costly, the value of an actual relationship will increase. I believe this holds even more true as we stare down 2011.

Whether you are a marketer or a copy writer or a communicator, differentiation does not necessarily come from what you do, but rather from who you know, how you treat someone, and how interacting with you makes that person feel about his or her ultimate business objectives. As financial times remain tough and spending on marketing services continues to require intense justification, the more you CARE about your client’s business and can deliver value with a sincere smile, the more what you offer will be unique and valued in return.

Mobile Will Become a Priority for Email Marketers

In 2011, mobile will become a top priority for email marketers.  Many email marketers don’t currently optimize their email designs for mobile devices, which means subscribers aren’t able to view and act upon their emails.  This essentially makes email marketing’s strong ROI ($42.08 per $1.00 spent in 2010) irrelevant.  So why is this so important?  Because according to The Radicati Group, more than 1 billion consumers will be accessing email on their mobile phones by the year 2013; this is compared to fewer than 200 million in 2009.  The adoption of more sophisticated mobile devices is growing daily; in 2010, the average consumer stopped using a simple cell phone and began accessing Facebook, Twitter, their emails, and more, from a smartphone. This will only continue to increase in 2011.  In order to get their messages read and calls-to-action acted upon, email marketers will need to optimize their email design for mobile recipients and develop a strategy that will effectively reach subscribers who are on the go.

As I wrote in a recent entreQuest blog post, the global economy appears to be heading out of recession.  For CEO’s, business optimism is sure to rise with such news as history has shown a healthy correlation between a strong economy and increased spending.Everyone talks a lot about change.  President Obama won his presidency on a platform of change.  Tupac and David Bowie both scored hit songs titled “Changes.”  And my personal favorite, Charles Darwin had an exceptional quote on the idea:  “It is not the strongest of the species that survives, nor the most intelligent that survives.  It is the one that is the most adaptable to change.”

Since change went from being the constant of our economic environment to the culprit of it in this recession, business leaders must decide how they will adapt to its mysterious nature as we enter 2011.

Are You Willing to Let Your Business Grow, Shrink or Die?

Every year as December rolls around and the new year approaches, marketers make predictions on up and coming marketing trends. In the past year I’ve spent time and effort attending many networking events and presentations while researching my predictions for 2011. There are certainly going to be doubters who think these have been revealed already in 2010 or even past years, but I personally think there is a lot of potential within the following trends:

These are just four of the predictions that I have for 2011 – do you agree or disagree with them? Please click here to read the rest of my thoughts on 2011 marketing predictions.

Now, it’s your turn. Agree? Disagree? What are your predictions for the upcoming year?  Share your comments below.