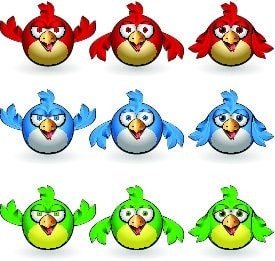 I first posted this as exclusive content on Social Media Today on January 25th. It took off, with over 10,000 views and 600 tweets. Since then, I’ve seen “What Angry Birds Can Teach You About ___” posts pop up like wildfire (I’ve linked to some at the bottom of this post).  Coincidence, awesomeness, or simply fuel for the Angry Birds’ never ending battle? Mankind may never know. Regardless, the exclusivity window on Social Media Today has timed out, so in case you missed the post there, here it is for your reading pleasure:

Angry Birds might seem like a (very fun and addictive) waste of time, but in reality, the game has a lot to teach anyone who’s paying attention. Perhaps I’m unique in being as obsessed with social media marketing as I am with Angry Birds, but while I’m playing, the game keeps reminding me of these important lessons:

1. Plan ahead. Don’t just attack blindly without evaluating your timing.

Angry Birds scenario: Ok. You’ve got a huge stone tower. A lot of glass. And a little bit of wood. It’s tempting to try to blast down that tower with the white egg-dropping bird, which is first in your line-up, but you see a bomb bird later. Patience, young Angry-Bird-Jedi. Use that white egg dropping Bird to catch the loner on the far side of the tower, and hit the tower with the bomb bird. Use your resources when you know they’re going to have the best results.

Social media marketing scenario: You just wrote a fantastic blog post, and you can’t wait to fire away, tweeting, Facebook posting, and Redditing until the cows (or little green pigs) come home. However, it’s 3am when you finish. Or two days before Christmas. So take a step back. Save the big hitter for later, when people are paying more attention. Don’t waste your best resources on a hopeless situation.

2. Just because you have a resource doesn’t mean you have to use it.

Social media marketing scenario: You have accounts on Facebook, Twitter, Reddit, Digg and Delicious. But just because you can promote a post through a given channel doesn’t mean you should. Do you think anyone on Reddit cares about the new features on your site? Do your Facebook fans want to hear from you for the 10th time in a week? Probably not. If you’re not careful, you run the risk of spontaneously combusting in midair, without making any real impact.

Angry Birds scenario: You keep aiming at the top of the tower, and making a great hit, but the tower’s destruction just blocks the green pigs, making them harder to destroy in the next round. Change it up, and aim at the bottom of the tower—this new angle may make the rubbish fall in deadlier ways.

Social media marketing scenario: This article about blogging and Angry Birds emphasizes aiming high. Yes, that’s normally great advice, but sometimes, you should aim low. Sophisticated, ambitious blog posts are great for a small audience of people who are well educated in your field, but sometimes simple content has a wider mass appeal, winning your brand better exposure. Don’t aim high just to aim high—aim at the right target.

Angry Birds scenario: You’ve planned your target for each bird in your arsenal. You feel like you’ve definitely got the right plan. But for some reason, you still can’t seem to beat the level. So change your plan. Aim at a new obstacle, or use a different tactic with some of your birds. If you’re still stuck, step away from the level. Go do something else. Maybe even sleep (what’s that?). Come back later, and your fresh brain and point of view will help you move forward.

Social media marketing scenario: Your strategy is immaculate. You have the right people doing the right tasks. Every base is covered. But you’re not getting the results you expected. Obviously, something is wrong. So switch things up. Let your blog writer take over tweeting. Change all your profile pictures and bios. Or post something in a completely different tone of voice. Track everything, and see if your changes affect your results.  You might be surprised.

Angry Birds scenario: It’s 1:30am on a Tuesday morning, and you’ve been stuck on the same level for hours. Your “just one level before bed” turned into a marathon of failure. You’re not doing this for fun anymore—you’re doing it because you’re possessed by an Angry Birds evil spirit of obsession. Stop it! Turn the game off, and go to bed. You shouldn’t play the game unless you’re having fun.

Social media marketing scenario: If you’re using social media for marketing, you’re probably trying to make money, and not just for fun. But social media, at its heart, is about having fun. Sure, people read articles to learn what’s going on in their field, and they watch how-to videos. But no one is going to remember your brands’ boring breakdown of how to install WordPress. They’re going to remember the posts that made them laugh, and the tweets they think are clever. So if you’re just churning out the same-old same-old content, stop it! Think about how you can make sure that you’re keeping social media the way it’s supposed to be: fun.

I love metaphors and analogies—so please comment with your insights about marketing that come from unexpected places! I’ll store them away in my arsenal, just like a bomb bird.