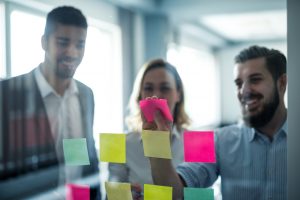 Everyone knows the best formula for a brainstorming meeting: Get your creative thinkers together in a big conference room and spend several hours verbally tossing around ideas and writing them down on whiteboards. Right? Wrong.

In fact, traditional methods of group brainstorming can actually suppress the very creative ideas they are supposed to encourage. This unfortunate reality can be traced back to three influential psychological principles: conformity, anchoring, and social loafing. In fact, these concepts may have been squashing the best ideas at your “tried-and-true” brainstorming sessions for years.

Learn why this happens, understand the psychology behind successful brainstorming, and find out how to coordinate a brainstorming session that will lead to genuine creativity.

In traditional brainstorm sessions, everyone shares their ideas out loud. However, this means that ideas can only be expressed and evaluated one at a time, which can discourage people from sharing dissenting opinions out of fear of being judged by the group — aka evaluation apprehension. (Not to mention that it limits the number of ideas that can be shared in a set time frame). Furthermore, participants usually express the most obvious ideas first, so when others rally around those ideas in order to seem like team players, the “brainstorming” actually leads to less creative ideas — exactly the opposite purpose of the meeting!

This desire to conform to the larger group opinion holds sway even when the group is clearly and objectively wrong, as much research (starting with Solomon Asch’s famous line experiments) has proved. Even if the brainstorming meeting opens with a claim about how the session is a “safe space” where all ideas are welcome, this token verbal acknowledgement is rarely enough to overcome the strong pull of conformity pressure.

In many cases, the same few assertive individuals take over the brainstorming sessions and share the majority of ideas. Even if no evaluation (either positive or negative) is given, these initial ideas can still set the precedent for the rest of the brainstorming session. In many cases, the other participants will unconsciously model their thinking on the prior conversation. This is a phenomenon called anchoring, which was first revealed in psychology research on number estimates.

For example, say you’re asking two groups of people to estimate the number of electors in the electoral college, based on one piece of information: You tell the first group there are more than 100 electors, and you tell the second group there are less than 1,000. The group told “more than 100” will give a lower average estimate than the group asked “less than 1,000,” even though neither anchor is remotely close to the real answer of 538. This is because the 100 and 1,000 numbers “anchor” the participants’ estimates, encouraging them to think of lower and higher numbers, respectively.

This phenomenon also applies to qualitative situations like brainstorming, encouraging participants to model their answers on the information they have previously been given — in the case of brainstorming, the ideas that came first — once again resulting in a lack of creativity.

Do you ever get a niggling feeling in the back of your mind during a group project that you’re doing more work than some of the other team members — but dismiss it as unfounded cynicism? Turns out, you’re probably right, although you might also be putting in less effort than if you were asked to complete the project by yourself. In group situations, not only are people less motivated to put forth effort, they actually don’t — a concept know as social loafing. This behavior is due to a variety of factors, including believing that others will pick up the slack, that your contributions don’t matter that much in the scheme of the group, and that no one will notice if you take it easy.

In a traditional brainstorming meeting, especially one that involves a lot of team members, it’s easy for social loafing to rear its ugly head. If two or three people are already sharing most of the ideas, everyone else can simply sit back and coast through the meeting, doodling on sticky notes rather than offering up ideas. Their lack of participation may not even be noticed if the other people generate enough ideas on their own.

So now that you know why traditional brainstorming doesn’t work, what should you do? In a nutshell, coming up with ideas should be done individually, while vetting ideas should be done in a group: individual ideas + group analysis + democratic evaluation = good ideas. You can do this by using a slightly different technique called brainwriting. There are several variations on brainwriting, but below is one approach that I have successfully used in various group scenarios.

The short time frame will force participants to get their ideas on paper without self-censoring. In contrast to traditional brainstorming rules, you want to deliberately withhold the specific topic(s) areas to be brainstormed until you are ready to set the timer. This last-minute reveal doesn’t give participants enough time to doubt their ideas — “Should I share my plan?” “Will everyone think this suggestion is dumb?” — and overthink themselves into conformity.

You are now primed to run a killer brainstorming session that’s truly productive and creative. This technique can be used to come up with ideas for anything, whether it’s thinking of an overall marketing strategy or building out an editorial calendar. Want more help creating remarkable content? Reach out.