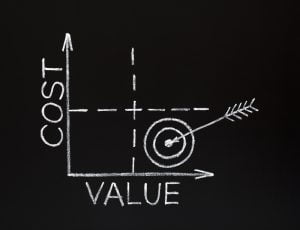 For many folks active in Social Media, and even those that aren’t, inevitably you hear people ask about the ROI. Why are people spending time blogging, Tweeting, Facebooking when it’s just a fad that doesn’t help our business?

And then earlier this week everyone was abuzz with news that Dell announced it has surpassed 3 million in sales from its Dell Outlet Twitter account. And the masses rejoiced – a tangible ROI number we can say came directly from Social Media activities. NOW our company MUST do this everyone started to think.
But wait; is your company really very much like Dell? I would argue that chances are it isn’t at all like Dell, so this number may not mean much to you at all. Chances are also that you can’t convince the folks at the top to agree with Zappos CEO Tony Hseih, who recently tweeted his take:

Twittering is like hugging. Just bc it’s hard to measure ROI doesn’t mean there isn’t value there.

My guess is your organization lies somewhere between the two – but there is still a way to prove the value a smart social media strategy can have for your company.

Marshall Kirkpatrick writes a great article on this at ReadWriteWeb which I couldn’t agree with more. While applauding Dell’s success, he also uncovers 4 better examples of quantifying ROI that may make more sense in your organization. I encourage you to read the whole article, but here’s a quick snapshot of the key point:

That Dell has made $3m from Twitter links is cool, and it’s a good arrow to have in your social media advocacy quiver, but here are a number of examples we think better capture both the bottom line and some of the soft benefits of conversation. Joe Cothrel, Chief Community Officer at enterprise online community vendor Lithium, gathered these numbers in 2007 and we included them among other resources in the RWW Community Management Guide.

Better customer experiences, far lower support costs and more buying activity in the long run. Those are observations that can help provide context to the high-profile example of Dell pushing e-commerce links out over Twitter. Dell is clearly doing a lot of the same kind of customer service via social media that the companies above cite, but watch out for falling into the trap of telling your reluctant boss that Twitter is important because Dell bagged $3 million there.

As I said, I couldn’t agree more. And this should help you build your case that a smart social media strategy can help your company, even if you can’t directly tie $3 million in revenue and your CEO isn’t much of a hugger.

Agree? Disagree? Share your opinion in our comments below.